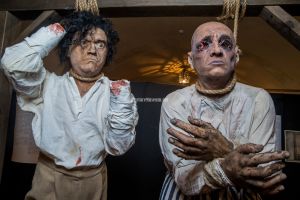 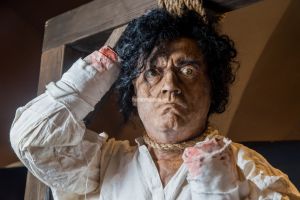 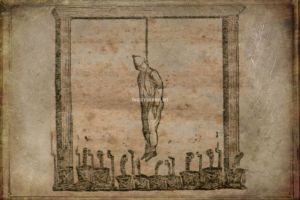 Hanging is considered one of the simplest forms of death sentencing. Different variants of the scaffold have long since existed in every corner of the world, and in some countries the death penalty is still carried out this way.

Modern history is full of examples where criminals were hung on trees, lampposts, and even cranes. In 1872, William Marwood came up with a way to improve the model and cool-bloodedly calculated that the less weight involved, the longer the rope should be. They were also recommended to use a scaffold with an opening hatch so that the height of the fall increased the torque of the noose’s tightening. Scientists have since calculated that after a fall from a three-meter structure the force of the rope’s tensions equals about 4400 N. This leads to the immediate rupturing of the cervical vertebrae and spinal cord, making for an almost inevitable death.

If the neck fracturing doesn’t occur, then death comes to the man, not in the form of asphyxiation, as many believe, but from the compression of his carotid arteries which supply blood to the brain. When deprived of their support, the hung man loses consciousness after a few seconds, and within 5 – 7 minutes you mark down the biological death as taking place due irreversible damage to the cerebral cortex.

An interesting fact: Until 1867 in England there was a particularly brutal kind of punishment used in response to crimes against the State – “Hanging, drawing, and quartering”. Executioners first tried to achieve asphyxiation for the victim, and only then tore apart the man’s innards and body apart.

What a wonderful day for a death sentence, wouldn’t you say? Strange. You yourself had wanted to grab a seat in the front row, right under the very ‘scaffolding’. And what’s funny is that this word originally meant “theatrical platform”. Do not get distracted though! The prisoners are being led in!

A pair approach the scaffold. The executioners have already had their way with them. One was strung up by his hand bones, another’s eyes burned out. An executioner brings one of them to the center of the platform and goes through the habitual motions of placing the deadly rope around the prisoner’s head. All that remains is to pull the lever and let gravity do its job. There are two possible endings, depending on the length of the rope and the way in which the knot was tied. If the rope is long enough, then the body will have time to fall at a particular speed. In this case, the condemned man’s neck will give off that characteristic snap and he will die quickly. The stiff fixation of the noose’s knot contributes to this very effect. The executors have come up with another variant, however. In this instance, the body travels a short way down and the prisoner, trying desperately to undo the loop around his severed hands with his fingers though all is really quite futile, eventually suffocates. His accomplice anxiously perks his head up to the sound of near-death agony, but his scorched eyes can’t fixate upon said noise. His head is violently placed through a dangling loop.

By the way, I’ll let you in on a little secret, death by hanging in situations where the neck doesn’t break rarely takes place instantly as far as visible exfixiation goes. Most of the time, the arteries feeding the brain with oxygen are squeezed, causing one to lose consciousness, and only afterwards does one die.