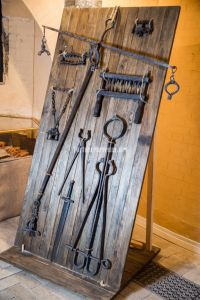 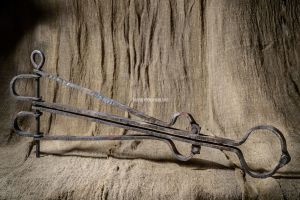 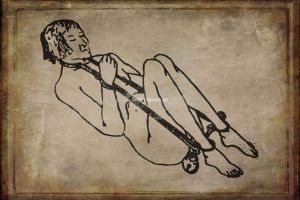 One of the versions of the the torture device known as the “Stork” (ital. – Cicogna) is similar in principle use to the tool called the “Scavenger’s Daughter”. This instrument’s origins should be accredited to the Roman Court of Holy Inquisition. The name “Stork” was first mentioned in the writing of LA Muratori (1749) entitled, “Italian Chronicle”.

The history of the “Scavenger’s Daughter” is tied to the reign of Henry VIII (beg. of XVI century). This device was actively employed on prisoners of the Tower of London, especially those of noble and high-ranking positions in society. It’s invention is attributed to the commandant in charge of the elite, British prison, Leonard Skeffington. It was also conceived as part of an addition after the rack called the “Daughter of the Duke of Exeter”, which was already in existence. The operating principles of the device – the fixation of the neck and limbs with metal straps and holding the offender in an extremely uncomfortable position for a long period of time. Visually, said instrument resembles stocks, but the pain experienced by the inmates is significantly more intense. It is enough to be imprisoned for mere minutes in this pose when the victim begins to be overwhelmed by excruciating cramps. Starting as stomach cramps, it ends as muscle spasms in the chest, neck, arms and legs. His unrelenting suffering reaches its peak and the man is brought to a state of near madness. Moreover, in order to increase the torment, the torturers beat their victims with a whip, or used a red-hot irons, “pectoral cross”, or “crocodile”. Sometimes the iron fetters which were wrapper around prisoner’s neck and limps dug into the flesh so harshly that any prolonged and unnecessary time spent in the device led to the development of gangrene, and consequently, death.

An interesting fact: A popular rumor transformed the original name “Skeffington’s Daughter” to “Scavenger’s Daughter” on the basis of the harmony between the names ‘Skeffington’ and ‘scavenger’. Also, it assumed that the original of the name “Scavenger” is also associated with the medieval custom of goldsmithing, by virtue of the force involved in packing scrap materials. Other variants include “Skeffington’s Shackles”, the “Iron Brace”, the “Stork, the “Spanish A-frame”, and to the people, it was commonly known as the “Scavenger”.

Now that your interest is piqued, I suggest you turn your attention towards this unfortunate soul. With her thin neck and wrists bound, we have here what is called a “Stork”, though by no means is she a bird. At the moment, this thief has the perfect opportunity to look at her sinful hands. Not a very sophisticated form of torture, right? I’d say otherwise!

At first glance, the device appears similar to primitive stocks, however take a closer look. Her face contorted in spasms, she enthusiastically gnaws on her own tongue and lips, as if wanting to devour them. She is slowly losing her sanity, and in a few hours, in place of said person will be a croaking animal. She would prefer the beat of a whip*, or her fingers chopped off. At least then she’d be allowed to briefly change her body’s positioning. The pain, whose source lies hidden somewhere inside her, is many times worse than the external torture that she is experiencing. Her neckbone, the tendons in her legs and arms, and the fibers in the majority of her muscles are under extreme stress, constantly without rest, and with every second this stress grows. She can only fidget, whine, and hate her body. And as you may have noticed, her body is her own executioner. Now with said body weakened, she spews gastric bile and shakes as if she we’re sick with fever but doesn’t lose consciousness. When the squeezed “Storks” are sapped of all their strength, a now defeated sack of bones will fall to the earth, unable to stand or even move. It’s difficult to imagine yourself in her position, isn’t it? Yet we all live under the same sun…

***For more details, see “Torturing of the Hands”