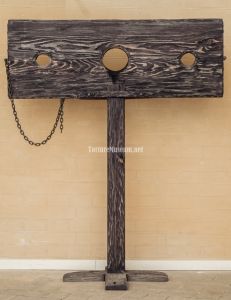 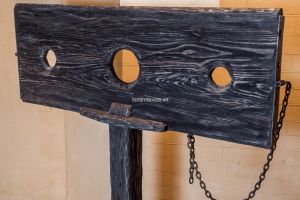 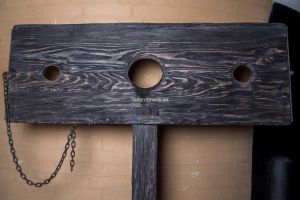 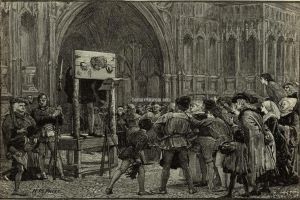 The Pillory was a fairly loyal, medieval way or punishing criminals via public humiliation and ridicule.

The device was arranged as a vertical, mounted column atop a platform in some public space, or a wooden block with clamps made for the hands and neck. Next, posters were placed around detailing the crime scene in order to make the information public. Remaining in such a fettered position while being mocked by the crowd, he is actively surrounded by disapproval. Rotting food, mud, feces, and even stones are thrown at those guilty. In addition, executioners can prepare a torture using red-hot iron rods. Typically, those condemned to be pilloried are there for a certain time, depending on the offense. In the XVIII century, the “pillory” became the most common method of punishing homosexuals. They beat, cursed, and cruelly bludgeoned those types to death.

An interesting fact: In 1703, Daniel Defoe was sentenced to the “pillory”. The writer was accused of defamation and given a reproach to go public, but to the authorities’ surprise, the people showered him in flowers with admiration, thinking he was a hero.

How does one punish a man showing disrespect towards the law if his social status does not allow for the application physical torture? That’s right — dishonor him in front of a crowd.

The man is taken out onto a low, wooden platform, and his hands and neck are laid on ordinary woodblocks. It’s in this position that he can’t help but stick out his ass, already humiliated by it’s current status. On a post hangs a sign which explains who this man is and why he’s worthy of condemnation. A crowd of ‘fans’ is gathering around him to watch the public humiliation. The curiosity of the onlookers is invoked by his expensive suit. When one of the more competent peasants reads the charge aloud, their enthusiasm increases considerably. “What ho, damned brazen fellow!” “Aha, masquerading as one of the noblemen!” Such phrases can be heard from all sides. The man in blocks closes his eyes and lowers his head to avoid looking at all of their malevolent visage. He then learns that this only leads to a larger storm of convictions. He grows angry and begins cursing the people, the government, the laws, and even himself. The anger gives him some moral strength, and he raises his head. The man peers down at all the faces unblinkingly, at those who would discredit his name, so that he might remember them well. They call for the prisoner to be beaten, however no one dares do this. Instead, a few of the braver ones pick up lumps of dirt from the ground. Combined with street filth, they begin throwing throwing the dirt at the man stuck in place. Someone wails a stone, cutting his cheekbone. The city guards sluggishly disperse the embittered crowd, but within fifteen minutes everything starts all over again.