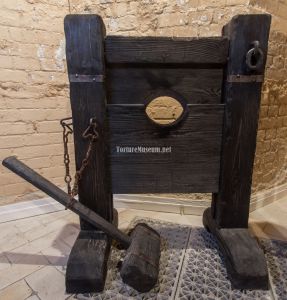 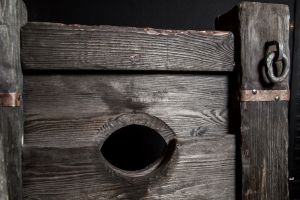 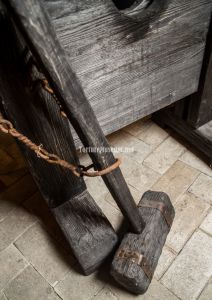 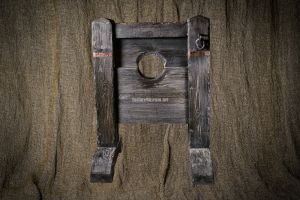 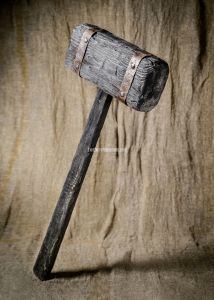 Decapitation – one of the oldest forms of the death penalty for serious crimes. However, for the delivery of such a punishment, the ax is not always used.

In the XIV century, criminals were deprived of life via the manual, “Hand-operated” guillotine. The main difference here was the use of a wooden hammer, and the head being cut off bu a sharp board. The actual process of death was quite painful for the victim and the executioner alike. For this reason, it was imposed only on the commoners… nobles had the choice of taking the ax.

The one sentenced bowed his head over the wooden structure and he is hit with hammer blows over the next until mutilation, but not instant death. The sharp edges of the planks tear at his flesh and crush vertebrae.

An interesting fact: The hand-operated guillotine was considered a “forerunner”, invented in 1791, revolutionizing the penal ceremony. Mechanized and accurate beheadings became universal, and no longer a privilege of nobility.

Severing heads* — considered unequivocally to be the fastest and most painless type of death sentence. I’ll show how this isn’t always the case.

This commoner disrespected his judges. He has no titles to show for, and so he is sentenced to death by a hand-operated guillotine. Scaffolding for spectators, and even benches one could rest on, are not present. There are only moldy stones and a wooden clamp for the neck. The commoner falls to his knees and begs for forgiveness. Grinning, the executioner takes him by the collar in one hand and raises the top section of the guillotine with the other. Its edge has been finely-honed from the bottom up at a sharp angle. One more motion and the prisoner is laying with his throat to the blood-soaked board. Suddenly and unpredictably abrupt, a maul hits the upper mechanism of the guillotine. The poorly sharpened wood drives into the hearty flesh of the neck. There comes an unpleasant, slopping sound. His lungs explosively let out air, however, the sound cannot be called a scream. The executioner gives him another blow whilst crimson drops of blood splatter his boots. The crackling of torn cartilage can be heard throughout the dungeon. Strike after strike. The man contorts his legs on the floor, his spinal column partially severed, but still death does not come. His punisher shows signs of distress and levies another series of blows in order to finally shred, rip, and tear through the spinal vertebrae. Finally, he misses and the maul comes down over the prisoner’s head. The severed head detaches from the neck and falls into the bucket.