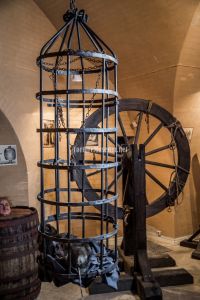 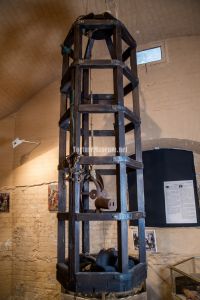 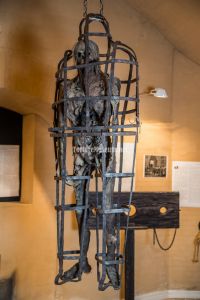 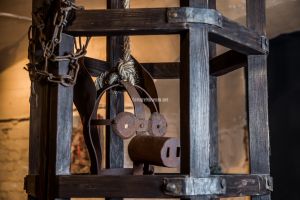 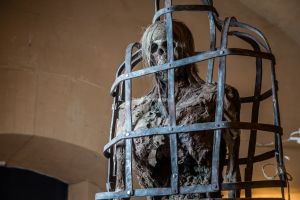 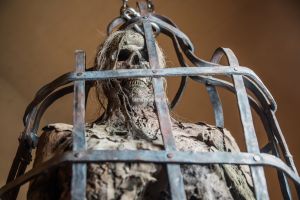 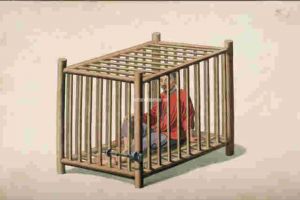 Imprisonment in a Cell

Since the ancient times, the capture in cells of a sorts has been used on criminals. Verdicts varied depending on the severity of the crime. Thus, the cell could be both an instrument of torture, and the place where said victims usually ended their days. In the Middle Ages blasphemy and heresy were punished this way –  a victim left to die, hung in his “iron coffin.”

The cell could be made from metal or would, and came with additional design options. Sometimes the distance between the bottom and top bars of the cell was quite large, and the prisoner would be under constant stress, afraid the bars would break and that he would fall. There was also the railway track model, which copied the shape of the human body. As a rule, those placed inside were overweight people, and their sizes slightly larger than the size of the cell. Staying inside brought on considerable discomfort and suffering caused by deformed limbs.
Sometimes the cell of the offender was repeatedly lowered into water with a long pole, with the obvious desired affect of extracting information. If a person deserved a death sentence, they were left in the cell until said death arrived. In such cases, the “iron coffin’ was placed on the gallows, or in the crowns of tall tress in open areas where the sun was beating down. The victim there was often subjected to abuse from onlookers and passersby. Death did not arrive for a long time, but gaunt and heat injuries, as well as birds, all came to peck away at the still living body.

It is a well known fact, that a wild animal wastes away in a cage. The same applies to a human being, even more so because said being is acutely aware of the limitations placed on their freedom of movement. And the tighter the space is made, the faster his moral and physical exhaustion will occur.

This pathetic skeleton once belonged to a youth of powerful physique, whom a judge sentenced to life imprisonment. His final shelter turned out to be a pressing, iron cage. During the first days locked inside, the prisoner showed no signs of dismay. He greedily devoured his prison rations, cherishing in his soul the hope of being released. A week passed and he grew

considerably thin, his face gone grey, and his movement jerky and nervous. Out of constant loneliness and inhuman anguish he took to conversing with himself out loud, forgetting all about food and water. Hematomas appeared on his legs and arms. His young body had beaten itself against the bars of the cage in vain hope of them breaking. Very quickly this young man turn into a thoroughly pale-skinned skeleton, with eyes that burned with animalistic madness. In the dark of night he cried out hoarse groans of one rotting alive.

There is, however, an even crueler way of locking one away in a cage, achieved through preliminary enchainment in an “anchor”. This devices limits one’s movements so that they cannot straighten themselves out, nor scratch a lice-ridden head. Iron braces cut the skin. One top of the strongest of muscle spasms, the prisoner suffers from infection in his bloodied and puffy, stinking ulcers. He sits in a humiliating, painful pose, and prays to the Heavens for a quick release from life. The cage, in such an instance, is merely an instrument of added moral pressure.