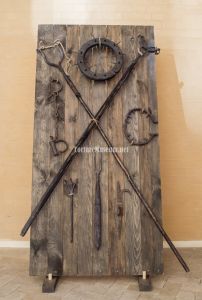 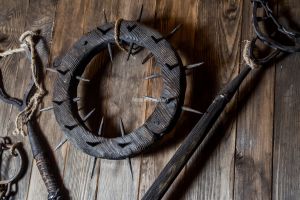 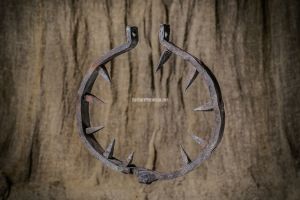 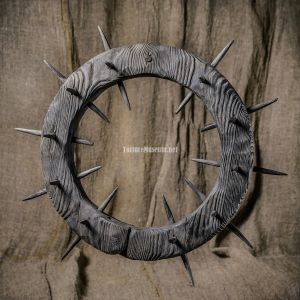 Neck traps – tools created for the detention and control over particularly violent offenders, and their safe escort. The classic “trap” is a ring on a long stick, with nails on the inside, and also equipped with a device resembling a trap on the outside. Any prisoner attempting to hide in a crowd was easily spotted in this device. After the capture, the trap snaps shut, digging spikes into the neck, and the prisoner is unable to be released. He will be forced to follow a supervisor without fear that he will resist. Prison guards often used a neck trap to control and subjugate their victims, while at the same time maintaining a safe distance from harm. This tool also allowed you to re=aim the convict’s neck so that he could be lead where the guard required him.

An interesting fact: Cervical traps are still employed on inmates in some countries. However, modern engineers instead use spikes supplied with electrical devices.

Now I am going to show you excellent tools for manipulating a person from a distance. And we are not talking about hypnosis, nor firearms.

The neck brace on a long wooden staff, very similar to those used in crock pots. This device allows you to grab the subject by the neck without dirtying your hands. If the jailer is agile enough, then he applies the necessary amount of force, and with easy motions of his hand direct the prisoner’s field of motion. If said subjects has the audacity to resist — he’s simply pressed against a wall, his Adam’s Apple squeezed, and neck twisted until his eyes begin to swell from pain and painful exfixiation.

In instances where the one applying the torture needs to deal with a particularly fervorous criminal, there is an improved brace with spikes and a perforated chain on a steel buckle-fastener. It falls to the prisoner iconoclast to make quick movements, and spikes pierce his neck. Subsequent abrupt movements can lead him to rupturing his arteries, or damaging his windpipe. Sometimes the despair, or an unnoticed step forces the prisoner forward with full force towards death, caused from bleeding out. Traps without long handles usually serve as an instrument of humiliation. The prisoner is reduced to the condition of a tamed beast, with only one difference — the spikes on his collar are located on the inner surface. The long points are a source of unrelenting pain, and can pierce the skin with every careless motion.