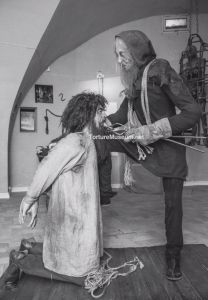 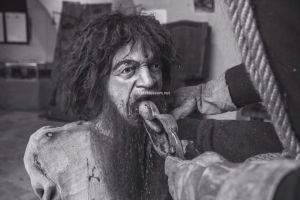 Medieval inquisitors treated heretics as cruelly as they treated blasphemers. Using cutting-piercing guns and red-hot pincers, they carried out their bullying by focusing on the victim’s tongues. Those sentenced were tightly bound and had their mouths open forcibly, the lower jaw often being fixed by a special hook. The tongs used are burning hot, and one touch from the metal will give a man unbearable torment. The executioners, however, do not stop when pulling the tongue out, often killing the victim. They could torture the tongue, cut it with jagged edges, or nail it to a table.

An interesting fact: In modern prisons there was a torture practice called “feeding”. For days the prisoner is not given food nor water. Then, exhausted from hunger and torture, the victim’s tongue is crushed. Finally, the victim is made to eat hot, salty prison food whilst being beaten by clubs, suffering from terrible pain in his mouth.

God forbid you ever publicly desecrate a symbol of faith, or one of her servants. The punishment that follows such a crime will leave you speechless, and at the same time, remove fragments of your human sanity.

In a chamber stands an unpleasant man held arm-in-arm, face bruised and hair disheveled. They didn’t even need employ torture to wrest a confession from him. He himself spoke of his blasphemies, in hopes of obtaining a pardon for his cooperation. And released he shall be, but not before his merited punishment.

His hands are tightly bound in order to prevent any attempts at resisting. The man carrying out the torture shows complete indifference in every way possible. He unfolds a well-worn and dirty burlap sack and removes a pair of forceps*. He works its rusty teeth in the air a few times over, then scans about for a large nail in the wall. Drawing it out and approaching the victim who is trembling with fear, he brings the nail up to the man’s eyes. The blasphemer, of course, takes to jumbling a justification so that he might refute his own words. He even starts to pray aloud an “Our Father”, to prove his devotion to the faith. When the poor soul pronounces the last ‘Amen’, the torturer seizes the moment. He abruptly brings his hand forward, and clamps his rough fingers over the man’s cheeks with all his might. The tongs unceremoniously clamp down on the wagging tongue, though not too hard as to sever its swelling red tip. The executioner carefully pulls the elastic speech organ towards him, and freezing in place, goes over all the potential variants of punishment in his mind. To pull even harder, clip off the tip with the forceps, or cut the roof of the man’s mouth with scissors? Or, not philosophizing too lightly, jab his fist into the man’s head, in order to cause the man’s teeth irreversible injury…