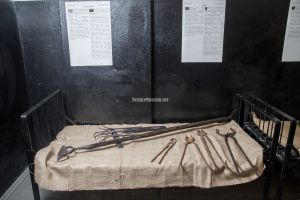 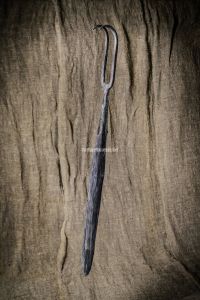 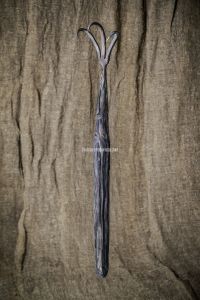 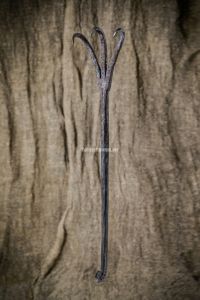 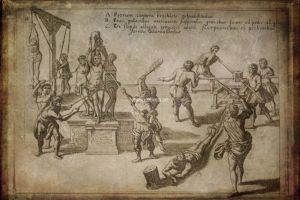 The “Spanish Ticking” was widespread in the Middle Ages, used to punish thieves and unfaithful wives. The Spanish Inquisition also admonished atheists this way.

The “Cat’s Paw” – a device that looked simple enough, but was very efficiently designed. Consisted of a plate with four curved, claw-like spines placed on a metal stick, making manipulation easy. It is an extension of the torturer’s hand.

The eyes of the crowd watching the torture looked on in awe at the realization of such a spectacle. Outlaws were hung by their wrists and made to suffer methodically by having shreds of flesh torn from different part of their bodies (back, chest, arms, legs). The claws dug so deep that muscles were separated from the bone. All this gave the victim unspeakable pain, but death came mainly from blood poisoning, since the teeth were rarely ever cleaned.

Are you afraid of being tickled? In society it’s said that this is a sign of a jealous nature. It’s nothing of the sort! This is a reaction of the nervous system brought on by unwanted touch.

See this woman here with her legs and hands bound? She has committed two crimes — cheating on her husband and stealing his gold. It’s something that certainly no one is going to ask her about before they begin the tickling. If not for the bruises and blood-blisters on her face and naked body, one might be able to call her beautiful. The man administering the torture adjusts the “Cat’s Paw” on a long wooden log. To begin, he lightly trails the metal “claws” along the adulterer’s skin, and tells jokes about unfaithful wives. Her abdomen and thighs are unhappily covered in beads of sweat and her breast thrusts in and out from the heavily intermittent breathing. Without stopping to laugh at the jokes, the executioner abruptly, and in one motion, immerses the upturned spines into the thigh of his victim, slowly leading them downwards. The rusted metal engrains four rickety stripes onto her pale skin, revealing the sight of pink muscle fibers. The woman beats her head on the board, screaming in a way that it fills the ears of anyone around to listen. But the torture does not stop. The “Cat Paw” is reluctant to come out of the mangled flesh. Ragged flaps of skin lightly dangle in the clammy, basement draught. The next helping of “tickling” uncovers the rib bones. The executioner douses the woman in salt water, and while she squirms from the eroding sensation of suffering, he presses the “Cat” to her left breast.