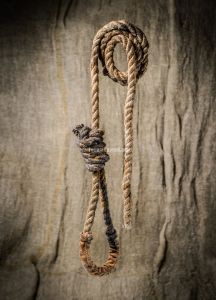 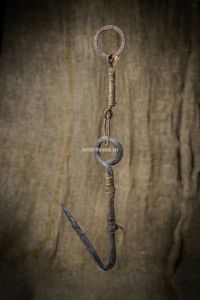 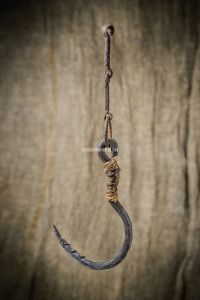 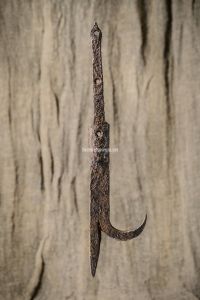 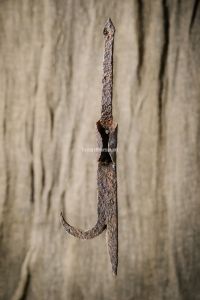 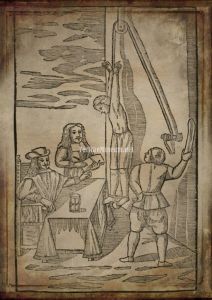 Suspension – a torture that is widespread in all countries. This could achieved in a variety of ways: in the limbs, rope bound through wounds in different parts of the body, as well as genital hooks or penetrating the sides of the abdomen. A weight can be attached to hair and other limbs.  If this was not enough to send the victim into remorse, the prisoner was beaten with a whip.

Even in the Ancient times, it was found that, unlike the veins in the legs, the veins of the upper body do not have the valves that prevent the reflux of blood. Medieval inquisitors did not fail to take advantage of this knowledge, using it to punish witches and heretics. The outflow of blood provoked rupturing  blood vessels, the contents of the stomach and saliva getting caught in the lungs and respiratory tract. This all led to the man, dangling upside down, to choke. When torture was further prolonged, his eyeballs would burst from the immense pressure., and the victim’s face would be covered in disfigured, gaping holes.

Hooks could be hung on severely deformed skin to inflict horrible damage, as such tortures usually lasted hours. This would leave behind completely torn from gravity’s pull. Zabeline “Stephan Razin” describes the torture as follows: “The torturer’s beloved had legs tied to weights. They hung me, eyes dark, bloodshot, ears knocking. Mishutka is led in shouting, he says he doesn’t know anything, the nurse has hidden away with the gaffer, seeming as though she won’t be punished. I scream that he is lying. That is when they lifted me to the wall and chained me in place of him. I looked at his head as though it were a beer pot. He was later flogged with a vine. He said that he was sorry for me, and brought false charges upon himself. They took him, hung me up again, and threw him onto the floor. I already don’t see anything. They later burn me with a hot iron. By the time the night is over he is gone. Pomer, they save. Where they’ve been sent, I don’t know. I was then stood up to a priest and the governor, and released…”

An interesting fact: Mussolini and his mistress Clara Petacci were executed, along with several of his associates, by way of suspension upside down in Milan in 1944.

Who would have thought that something as banal as suspension could be carried out in thousands of ways? For example, one can be suspended from behind by their dislocated hands. All that they can do is buck their head back and forth to somehow distract themselves from the sharp pain in their shoulders’ joints. The most effective method of torture acquired with the help of suspension — hanging one from their legs, upside down. In this position blood quickly flows to the head, bloody bubbles begin running from the nostrils, and then, in some cases, people’s eyes burst from the enormous pressure. A more refined procedure is possible — the person’s spine pierces through them at shoulder blade level, or below the skin of the breast if this is a woman. A hemp rope is inserted into the wound, and the elasticity of the skin piece is transformed in a way that it doubles as a unit of torture. The rope becomes black from clotted blood, and a person can survive a couple of days, sometimes longer, if given water.

Hooks can be attached to the the skin of the stomach, pierced through the axillary cavity, forced under the pubic bone, under the shoulder blade, and even into the lower jaw. If you position one of these hooks under the right rib, then the offender will dangle like a pig carcass and suffer from pain in their liver. Unlike rope hangings, hooks are designed for a shorter duration of punishment, as they cause a person to bleed out. In cases of botched treatment, damage to vital organs is inevitable.

Here you can see one of the victims of suspension. This unfortunate soul was forgotten in the torture chamber for a few months, and upon being found, their skeleton was left there to intimidate the living.