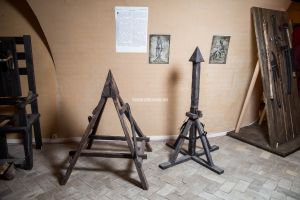 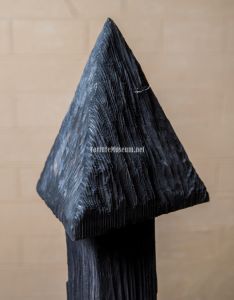 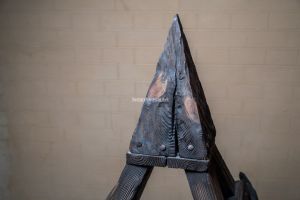 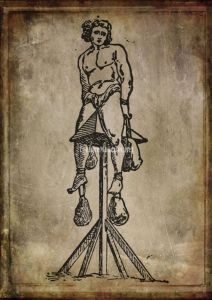 The Cradle of Judah

The Cradle of Judas – one of the most sophisticated of the Spanish Inquisition’s inventions, it was created to deal with heretics. Ippolito Marsilli designed and built this torture instrument.

A device is a heavy wooden pyramid that rises up on all fours, like a chair. With the aid of rope and gears, the one accused was hung naked and slowly lowered directly onto the surface of the point. The torturers used the natural force of gravity to affect the most sensitive area of the human body – the perineum region. The form of the device is carefully designed so that the most painful suffering is delivered to the victim from the braces. The torture is extended through the night, leaving the suspended person to bleed to death. Come the morning, the interrogation will begin anew with vigor. Often times, the feet are tied to additional weights, something not very welcoming. And so this might play out as such for several days, also due to the fact that the edges are not clean, serves as a constant cause of death from infection.

Thus were the sins of the heretics and their associates were sought out. That is why in the name itself we have mark of the famous traitor – Judas.
An interesting fact: Among other instruments of torture that were invented in the Middle Ages, the “Cradle of Judas” was considered humane and was originally only intended to disturb sleep.

Can you believe there are actually people out there who wouldn’t turn in their accomplices, even for a large sum of money? Let’s say there are. How does one reveal a conspiracy? In this particular case, an investigator relies on the help of the Cradle of Judas. Anyone cast unto her becomes a traitor.

The arms and legs of the defendant are held in loops of rope. The executioners, donned in gloves, take the free ends of the rope into their hands and begin pulling them. Thanks to a system of suspended blocks this doesn’t demand a lot of force, and they are able to reposition their victim’s bodies much like experienced puppeteers working with marionettes. The man erupts upward toward the ceiling, screaming. Perhaps it from fear of torture, or from the humiliation that comes with the limitation of his physical capabilities. The executioners pull on the ropes in such a way that the victim’s pelvis unfurls, and lowering him down, the body flounders in the air atop the sharp point of a four-sided pyramid. The heart-piercing cry makes even the executors wince. The edges bite into the crotch of this soon-to-be Judas, tearing tendons, nerves, and lymph nodes. The prisoner’s own weight forces him to settle downwards along the stake. He begins to rock from side to side due to the incredible pain, only to contribute to the sinking and expansion of his wounds. A mixture of blood and feces streams down along the faces of the pyramid. Most of those sentenced give up within a few minutes, maximum — hours, however the executioners can always prolong the torture throughout the night. This is called the “Night Watch”.