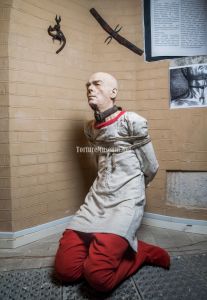 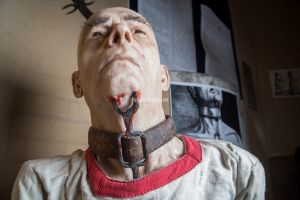 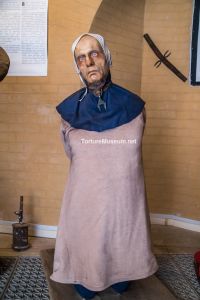 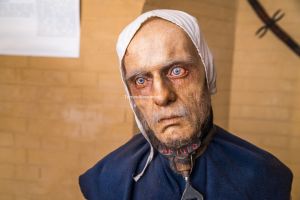 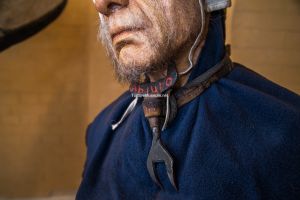 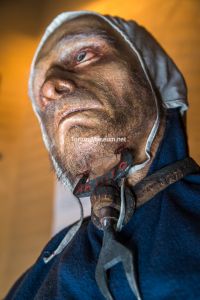 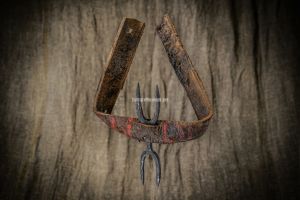 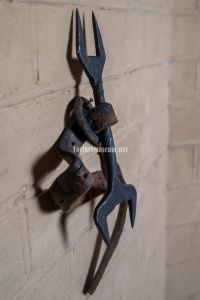 This invention of the Inquisition was made to deliver the “merited” torture to witches and heretics.

The tool of punishment here is a two-way plug with a collar on each end of a fork’s points. On the fork the following phrase was visibly engrained; “I renounce” (I recant, ital. Abiuro).

The design of such “Forks” are is simple, and not very pretentious. The bound person, however, will be made to suffer continuous pain, unable to move their head and lower jaw. Four sharp spines pierce his neck… two near the chin, two near the sternum. Attempts at speaking result in abrupt pain. Even persistent heretics of the Church would confess if they were made to stay in this contraption for a long period of time. Often, such torture was dramatized as the prelude to auto-de-fa’s (prolonged Inquisition verdict sessions), after which the heretics were burned at the Stake in public view.

An interesting fact: In the instinct of self preservation, the victim throws his head back as much as possible, as bending was enough to end his suffering. The length of the teeth of the fork, however, had been specifically designed so that even when tilting forward, death was not instantaneous.

How often do you gaze up at the sky? Which style speaks to you more: silver stars upon a black background or a cloudy white cast over blue?

Turn your attention to this wonderful invention with four teeth: two at either end. A leather band, placed through the loops, bites into the man’s neck, pointing his vision in the direction of his false religion. Put simply — he’s a heretic. His lips tremble and eyes water when the two sharpened teeth puncture his chin, and the other two — his sternum. The fork’s length is chosen very carefully, and the criminal’s head his secured to a backstop. Now he is looking upwards, unable to make even the slightest head movement without feeling a painful injection. This is extremely belittling, especially when, in place of a sky above his head, there rests only the sooty ceiling of a torture chamber. Even merely swallowing one’s own saliva is torturous — the strap compresses the Adam’s apple, inducing brief spasms of suffocation. After a few hours the muscles in the neck and shoulder blades stiffen. The rear of his head aches much like after a monstrous booze session. The burning spasms originating from stagnated muscles travel alongside minor tremors throughout his body. Dark circles appear in his eyes. In his thoughts — panic-filled despair. The man attempts to lowers his chin, if maybe even a tenth of an inch downward, but instead of relief he feels the teeth of the fork gouge his body. His spectrum of agony has been sealed.