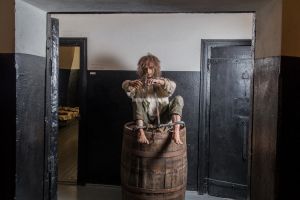 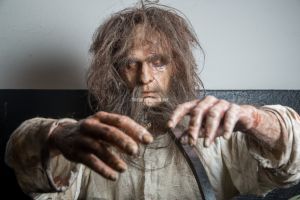 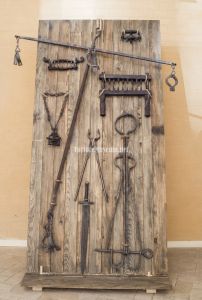 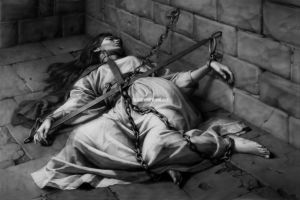 According to some reports, the “Prayer Cross” was invented in Catholic Austria in the XVI-XVII centuries. This is evidenced by a rare edition of “Justiz in der alter Zeit” (Justice in the Old Days), available in the museum of Justice in Rottenburg, Germany. An authentic historical model is currently being stored in the tower at the castle of Salzburg, Austria. The “Prayer Cross” is a metal structure with fetters that have the hands and neck impounded. The outlaw is chained into a cruciform position, which is symbolic in meaning both obedience and humility in the face of justice from the Church. The body is left for a long while to rot in the damp dungeon. Limbs quickly swell and prolonged immobilization causes unthinkable pain.

For carrying out torture here a metal cylinder is used, one which is open on both sides, with a metal ring bolted to the ground. Please force the convict to stand inside the cylinder, thus immobilizing the lower portion of his body. Then, having been forced to bend over and his hands chained to a metal ring, he’ll spend a few hours in this position. This alone is enough to provoke muscle spasms and other pain. After a very long soothing limb torture, extreme, lingering pain appeared, often leading to injury.

An interesting fact: The “Anchor” is still applied in jails in China. There are even cases of criminals dying from being kept too long in an iron grip.

Is it possible to teach one humility? You don’t need to answer, it’s a rhetorical question. And all the same, there’s an obvious answer to said question.

Into its simple design the prisoner is generally shackled; a man with whom they would rather wait to make conversation until better times come. His limbs and neck bound in chains, the lengths of which are held back by the rungs of a metal cross. This damned soul is then thrown to the cold floor. For the first half hour the prisoner wonders why he’s been let off so mercifully, when he was promised earlier excruciating pain. Wanting to turn over on his side, he makes and effort, but faces an insurmountable obstacle. The cross greatly limits his positioning in this space. A feeling of anxiety settles into the prisoner’s heart. Another few hours go by. Loins and shoulders numb from cold and stagnant blood, he has a strong desire to straighten the joints in his knees, stretch his legs, and free his hands… but this is not possible. Only the chain’s mocking ring breaks the basement silence. In this position he cannot fall asleep. Any attempts to somehow maneuver into another position fail. Stiffening muscles add to the aching weight, soon becoming a burning sensation. Due to this eensation, the prisoner, he himself not even noticing, begins growling and hissing through his teeth. Time is passing by. Every second spent in this despicable position is its own separate abyss of deepest despair. The man calls for aid, crying, praying, muttering something incoherent. Hours go by, days, weeks. Pain, fear, and discomfort begins to show itself for what it really is. This is called humility.