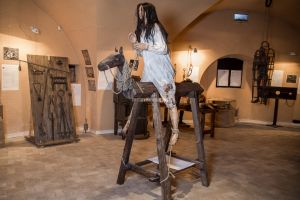 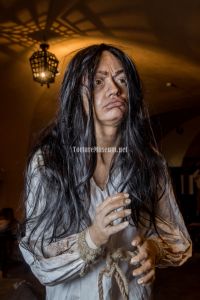 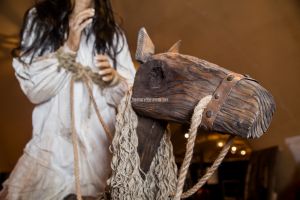 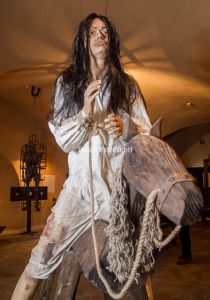 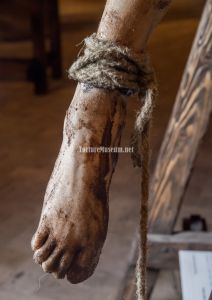 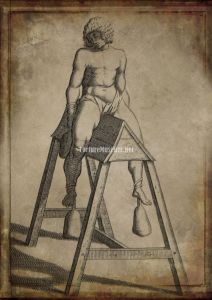 The “Spanish Horse” was invented by the Spanish Inquisition in the medieval times to punish those guilty of heresy or witchcraft. There were cases, however, when the “horse” took on a more masculine shape and delivery.

It is considered to be torture to stretch one on a tight rope (metallic wire), the genitals rubbed until bloodied. Since the appearance of the device it has been modified and mutilated, acquiring new and more sophisticated parts in both technical and aesthetic ways. Its essence remained the same – mainly, the sharp corner of the triangle shape which serves as the original seat upon which the torture takes place. The invention is preceded in appearance by the “Cradle of Judas”.

The construction is made up of metal or wood, often times both those materials. A naked man is tied up and fixed onto the horse so that his feet can’t touch the ground. To enhance pain at this stage, torturers can pull the ankles in different direction, or tie on additional weights. If that was not enough to make one repent his sins, the victim’s soles were splashed with hot ashes or tickled with fire.

The torture was accompanied by the rupturing of the perineum, and copious blood loss, often ending with a painful apex as the sacrum breaks.

There exists information about the trial of one woman named Maddalena Lazarus held in Bormio in 1673 for 4 months. She was subjected to various forms of punishment, but did not own up to her guilt. In the end, the city council decided to sentence her to 15 hours of torture by goats, followed by the repeated procedure in case of silence. Maddalena endured all of but three hours of said tortures. Nevertheless, she was also tortured for 5 hours on the box in order to affirm a voluntary confession. Then she was sentenced to be beheaded and subsequently, burned at the stake. Her ashes were scattered on the winds.

An interesting fact: During the Edo period in Japan, this torture was used in the struggle to spread Christianity and force apostates to renounce their faiths.

Do you like riding horses? This genteel activity would be extremely uncomfortable if not for the invention of the saddle.

No sooner has the commoner sentenced for punishment laid eyes on the torture device when she lets her legs be swept along the floor. Her body is literally hanging by the hands of the executioners who are dragging her towards the “Spanish Horse”. She curses aloud as the the rough executioners split her legs apart, tie her hands to the the head of the ‘horse’, and seat her on a wooden beam. Biting her lips in pain, the condemned woman tries to lean to the left and right in order to fall to the floor, however the upward facing angle limits such maneuvers. Her legs dangle in the air, and the very place they converge becomes a source of humiliating pain. All that she can do — sob, and powerlessly knead the air and inner surfaces with her legs, from which hot blood drips down. For some time, the woman lays immersed in a monotonous, painful trance, unconsciously calling out for the aid of her soothing, childbearing instinct. However, when her torturers attach stone gears to her legs, the “Spanish Horse” transforms into a giant knife, cutting the body in two with a truly fiendish deceleration. The adulteress, minute by minute, senses everything as she is extended along a natural, anatomical indent. Blood splashes the floor in thin trickles. Suddenly, something snaps inside her — she descends into madness, and with inhuman zeal begins to bounce atop the ‘horse’, so that she may speed up her own demise. There’s another internal snap, though all the onlookers present in the chamber have already heard it. This is the sound of her sacral bone breaking.