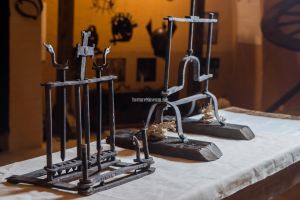 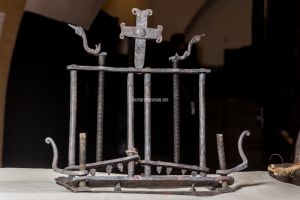 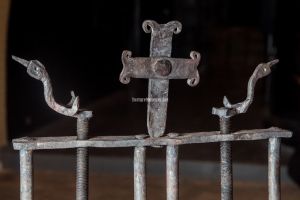 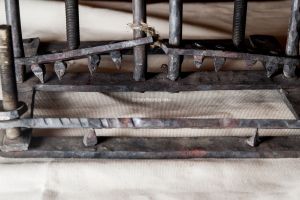 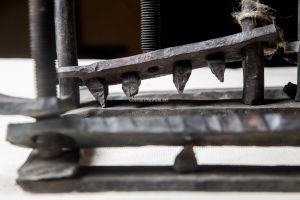 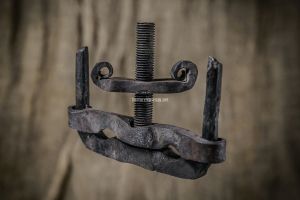 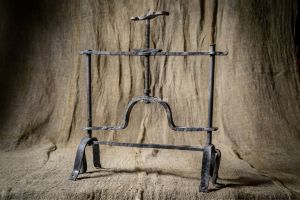 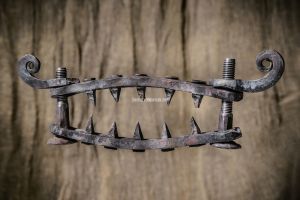 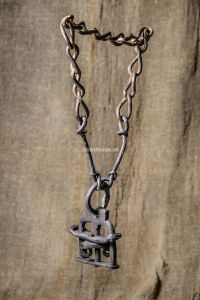 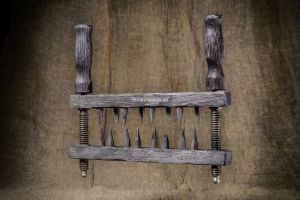 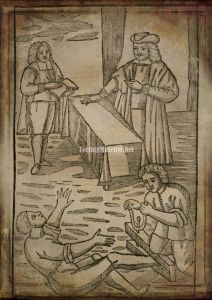 The “Vice” – an essential piece of medieval dungeons. These tools are designed to clamp the fingers, legs, and head. Along with this class of torture devices, a “knee-shatterer” was also implemented. Vices were used when the rack couldn’t render the desired effect on its subjects, and there came a need for more violent interrogation techniques.

The “knee-shatterer” – a wooden press with spikes (numbering 3 to 20) which crippled one’s hands and feet. The molten iron “claws” would pierce the skin and damage ligaments, while also cauterizing wounds and reducing blood loss.

The “skull-crusher” wasn’t any less terrifying of a device. The victims’ heads were fit into metal, skull vices, to be crushed via a screw mechanism. Modifications were made with a sharp pin on the inside of the cap which dug into the skull during the screw’s rotation and fixated him in position, while also bringing with it additional torment.

The invention of the finger vice dates back to around the XVI century. Various models have appeared in Spain, England, Germany, and ancient Russia. Vices could be constructed from iron or wood, and the plates can be outfitted with or without studs. The phalanxes of the hands and feet were placed in an iron vice with studs and screws, then twisted, and after, pressured by the plates, eventually fracturing the bones. Following this torture, one’s human capacities were lost, nails never to grow again thanks to the executioners having burned out the nail’s sinuses.

The painful sensation caused by this torture was described by a prisoner named Karster (1682). “And then he came – Oh, God have mercy – the executioner who placed me into the vice, tying both my hands together so tight that everywhere blood gushed out from under my nails. For four weeks I had no control over my hands, as you can probably tell by my handwriting.”

An interesting fact: It is worth noting that in some Latin American countries, the “skull crushers” are still used to compel prisoners to cooperate with investigations. Although modern models are equipped with soft studs to be more humane, the principle of compression is no worse than its medieval counterparts.

You’ve of course heard the expression “white bone”. That is how nobles are spoken about, however dare I assure that one’s position in society has nothing to do with the bone’s color. Nor does it the effect the hardness of their bones, either. This is quite easy to prove. The construction of the vice torture device is nothing too technical; there is a rotating screw and two compressing planes. Even here, however, a place for the scope of human fantasy has been found. Let us take the finger vice, for example. In the East, thieves had their hands sliced off, while the Europeans were prone to more imaginative punishments. Picture in your mind the brutal terror one feels when the phalanx of their fingers is compressed by iron jaws, all the while enduring pain leading up to the farewell crunch. Bones which are broken in this manner will grow out very poorly. Shattering the forearms is also done in similar fashion, only that larger vices are required, as well as more muscular executioners. A separate device, “the Knee-grinder”, was contrived for the lower limbs. One’s legs would be fixed to a wooden block, and two dual-direction bars with spikes turn the kneecap into a bloody mess. But more than anything else, people entering the torture chamber fear the vices designed to fit the skull. The head is fixed with clamps so that the victim’s chin rests on a firm, secured base. With the help of all the aforementioned screws, an iron plane is pushed onto the skull from above. At the same time, the teeth are being clenched so tightly that the jaw cracks. After this, the bottom of the skull breaks and along said fractures out pours the brain. This is all to say, bones will be bones. As with the noble, so too with the beggar.