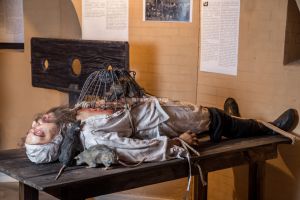 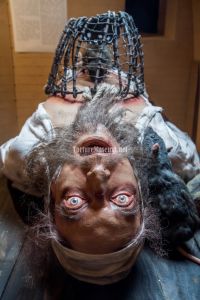 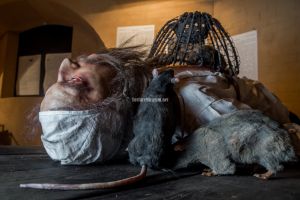 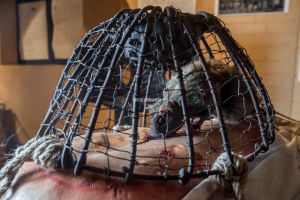 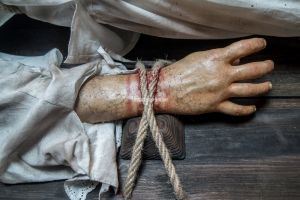 Like all ancient states, originating in the China, their methods of torture and executioners from some of the crimes committed. A number of them are still striking in their sophistication and bloodlust. A striking example is that of the questioning by rats, which is an improved form of evolved out of Europe in the XVI century. The initiative belonged to the Dutch Revolutoinary Leader Ditriku Sonoyu. The victim would be stripped naked and tied to a table. Then, after being put on his stomach, a cell with a sawed-off bottom was put on top of him, inside scurrying hungry rats. The real torture began when hot coals were poured on to the cage. The rats, then gasping for breath, gnaw and dig their way to salvation trying to escape the heat through the innards of the victim. This method was very effective in terms of interrogation, as the offender would feel a powerful combination of disgust, fear, and pain. Often he would confess, without waiting for the rodents to dig their holes.

An interesting fact: The Roman Emperor Nero used rats as a tool of “justice”. An outlaw might be placed in a barrel filled with dozens of hungry rodents. The rats devoured the human flesh, and when the loaded ones got full, they tossed even more hungry ones inside. On the Indian subcontinent executioners commonly took place in another way. The prisoners were trousers with space in the groin, though tightly tied at the bottom. Rats would be poured into this bag of pants; rats looking to tare out the poor man’s groin.

There is one animal that can interrogate a prisoner more effectively than even the most skilled torturer could manage. As you’ve probably already guessed, that animal is the rat.

On a table lies an extremely gnarled man, suspected of conspiracy. A metal cage without a bottom has been placed atop his stomach. His breathing is heavy and intermittent. A rat squeak can be heard within the chamber, and the man’s eyes begin wildly searching for its source. His forehead is crossed with disturbed creases, fingers rapping the table’s surface in ragged rhythm. The young apprentice journeyman is wearing a thick leather glove. He reaches his hand into a box and takes hold of a few mangy, grey rodents. The doomed interrogatee turns away. The senior investigator gives the boy a friendly nod, and one after the other places their pets into the cage. The animals get acquainted with their new space. They scratch at the metal bars and the man’s skin, although for now its nothing more than a tickle. Glancing over their fat tails, the interrogatee jumps when the torturers begin pouring hot coals over the top of the cage. “No, please, be merciful. Anything but that!” begs a trembling whisper. The cage is quickly heated, and the rats begin restlessly rushing about. They are already sinking small teeth into the soft cover of the man’s flesh. The criminal’s shriek builds in horror as the rodents start gouging bloody holes into his abdomen. They quickly tear through his intestines, deepening the womb, digging up a viscous broth of human entrails. The man pants from pain and disgust, his entire body doubled over in convulsion, but the cage is not so easily overturned. Only a pair of coals fall off, leaving burns upon his chest.